Publichouse is Open in Springfield

Springfield has a downtown beer bar! Colby Phillips and Patric Campbell, the owners of Tap & Growler and Beergarden in Eugene took over the building that was home to SPROUT Food Hub into Publichouse. It is much more than a beer bar, though. The transformation of the church building begs for irreverent jokes– Head to the altar for some holy water! Does everybody drink from a communal chalice? The power of IPA compels you!– but also provides a variety of neat spaces to drink great beer.

The showstopper is the sanctuary. Order your beer front and center at the stairs to the altar, and find a seat at booths along the walls or custom picnic-style tables down the center. Or head upstairs to the choir section and enjoy the stained glass-tinted “God’s eye” view. There are 24 beers on tap there, which run the gamut of styles. For the grand opening, Publichouse staff brewed collaboration beers with a couple Oregon breweries. There is a cooler with select bottles and cans as well. 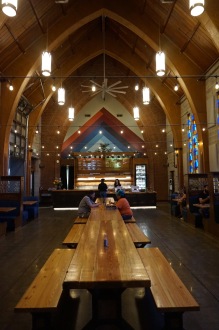 From the sanctuary, you can access the 100 Mile Bakery. My friend Leda Hermecz was one of the original members of the NEDCO business incubator and SPROUT food hub there, and her locally-sourced food is hearty and fantastic. She makes a killer wedding cake, too…

Outside of the sanctuary, the three food businesses that have been serving for a couple years are still there. La Granada, Pig & Turnip, and Cascade BBQ provide food anywhere on the grounds (you can take beer anywhere, too).

Down the hall past the kitchen is a door that leads to a grass courtyard with–you guessed it–more beer! A dozen or so beers are on tap at the Arbor Bar under a small awning next to the stage, and there are picnic tables scattered about. This is my favorite spot at Publichouse, as it feels like a real beer garden. It’s a perfect family friendly spot as well.

The bar of Arbor Bar at Publichouse 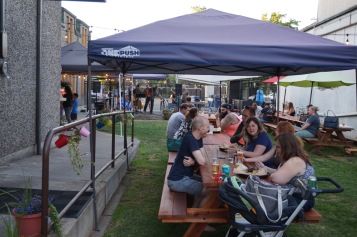 On the other side of the building, the soon-to-open Whiskey Bar will open in what was Claim 52 Abbey. The cozy space will be a good winter hideout, and will have two beer taps as well: one for a lighter, beer-back sort of beer, and a tap of rare or vintage barrel-aged burly brew.

All beer orders are made at the bar(s), and if you’ve started a tab you can order from any bar; food is separate. The staff are kind folk, happy to oblige inquisitions from budding craft beer drinkers.

Publichouse offers downtown Springfield residents an opportunity to expand their beer horizons close to home, and is a great complement to Plank Town Brewing just around the corner. The vibe at Publichouse stops short of “urban” or “modern” by way of the building’s inherent flow and separate spaces. Rather, it feels homier; you can drink in the space of your choice. It bears similarities to The Bier Stein (as a beer hall) and McMenamins (for the diversity of spaces and atmospheres), but has an aesthetic that’s present at Tap & Growler and Beergarden too; maybe it’s the Marie Callendar’s furniture.  Some of the wood used to make the tables came from an old Pabst brewery (a cheeky touch), and the long center tables in the main hall were custom made by Stonewood Construction, which did the build-out.

The front patio at Publichouse

Springfield is on the up-and-up culturally and businesswise, and is not without existing craft beer joints. McKenzie River Taphouse serves the Thurston area to the east, and Hayden Bridge Taphouse has a good taplist, killer street tacos, and a surprisingly good bottle selection, just north of Highway 126 on Mohawk Blvd. Though those are far-flung for a proper pub crawl, the beer scene in Springfield just got a huge boost with Publichouse. The 3 block strip of Main Street downtown has grown from Plank Town and the Washburne Cafe to include Bartolotti’s Pizza; Dark & Stormy, a new bar from the owners of Hayden Bridge; and the (hopefully) soon-to-open second location of Cornbread Cafe. (Sprungfelders, don’t be mad if I missed other good spots (like Noodle ‘n Thai!); just take me there sometime.)