How to Beer Week

Beer weeks are hard if you have a real job, or a life. If, like so many others, you suffer from FOMOOB (fear of missing out on beer), you know that a good plan of attack is crucial to maximizing your sample factor and minimizing drunken calls home for a ride. 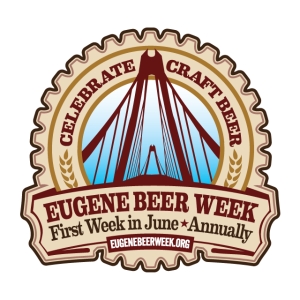 Eugene Beer Week is in its 8th year! Founded in 2011 by 16 Tons proprietor Mike Coplin, it totally qualifies as a beer week, but also totally qualifies as a classic Eugene interpretation of a beer week. Since UO football games are the only events that motivate most people to mark their calendars, businesses participating in Eugene Beer Week may anticipate a lack of enthusiasm but must prepare for hordes. And it’s not even football season! Despite my pessimism, EBW supports a bunch of great events. Here’s where I think I’ll be. Maybe.

It begins with a grand kickoff a couple days early: The Bier Stein Invitational Beer Fest. I am biased because it is actually one of the best beer fests in Oregon, if not Eugene. And I have helped organize it every year. But it’s really the best because of the attention to detail that Dave puts into it, and the lineup of beer that includes debuts of special brews, one-off beers, and–this year–a whopping four collaborations various staff did with breweries. It’s this Saturday (tomorrow!), June 2 and is an easy $25. Most of the beers are 1 ticket. I’ll be there until it’s time for dinner and The Flaming Lips.

Monday is my deadline for an article, so I’ll be celebrating my procrastination by working the big screen at Beer Family Feud at The Bier Stein (again!). This is one of many long-running EBW events, but isn’t the usual semi-social drinkathon. Two teams of brewers, who become increasingly rowdy and tend to heckle me when they make a bad guess, compete to guess the most popular answers to questions answered by our [less rowdy?] bar patrons. It starts at 7 and fills up quick since there is also a raffle for prizes. And the closer you sit, the closer you are to Ty Connor.

Even though there is a beer dinner at the Stein with Oakshire on Tuesday, I’m going to give it a pass (but don’t recommend missing it). That is simply because I now do this for a living, not plan beer dinners that I get to attend for free. Who’s the sucker now? No, I think I’ll get some exercise and bike over to Hayden Bridge Taphouse to crush everybody at Beer Trivia (that’s pure hubris talking, everyone), hosted by beer buyer Sebastian Rauenzahn. That starts at 6:30. Deschutes Cultivateur is on tap there right now; that’s what I’ll be drinking if it’s still there.

Wednesday will be pub crawl day. I may just do the entire Eugene Beer T, as there is some contiguity with events. Join me at any time! South to north, east to west: Tower of Sour at The Bier Stein (Loons! Sennes! pFriems! (If that means nothing to you, come have a flight.) Manifest Beer Co. is having a benefit for the HIV Alliance, and I think that’s really groovy. Brandon’s beer has gotten a hell of a lot better since he found a stable home for his 4-hectoliter brewery, and deserves some love. If I feel like doing some heckling, I’ll swing by ColdFire and watch Dana from Oregon BrewLab teach people how to taste beer. Like, really taste it, not just say it’s yummy because it’s hazy. Westward, Beergarden is having a Modern Times pop-up pub all week. I’ll go because when I went to Modern Times-PDX new location it was a hipster gallery and far too distracting with all the mismatched clothing patterns and coiffed whiskers to pay attention to the beer… or the prices. OK, that sounds like a solid Wednesday to me.

Thursday is another doozy, and I may have to sing for my supper to attend the Alesong & Friends Rare Beer Tasting & Discussion from 6-9pm. I really want to. The price tag may burn your eyes, but for the breweries they’re bringing in, it’s worth it for the experience (The Ale Apothecary, The Bruery, Cascade Brewing, Casey Brewing and Blending, De Garde Brewing, Jester King Brewery, Logsdon Farmhouse Ales, and Wiseacre Brewing Co.) In this case, “experience” doesn’t mean the beer is, or has to be, good by any standard definition; good is subjective, and these breweries utilize the subjective sensory skills of their brewers and blenders to create flavor combinations that don’t exist in nature (and yet are made by… nature). I want to taste that just as much as I want to taste a Czech lager I brewed myself (that is: a lot!). It builds character.

Simultaneously, and much closer and cheaper, there is a book release at Falling Sky Pub for Beer Hiking Pacific Northwest, written by Brandon Fralic and Rachel Wood (who totally stole my idea that I never told anyone!). If you have to be near a brewery when you hike (no judging!), these two have you covered. Writing books is hard work, and I’m happy to see two of my favorite things combined in print media.

*Update 5:54pm: Ninkasi is hosting Pints for a Cause for my homebrew club, the Cascade Brewers Society! Thursday from noon-10pm at the Tasting Room, $1 from every pint sold will help us spread the good wort, and have fun doing it.*

Prior to that, McKenzie Brewing is opening up its brand new tasting room/production facility and releasing its first batch of cans. This project has been in the works for over 5 years, since the brewhouse was moved up from a northern California location of the small Steelhead brewpub chain. The new spot is 1875 W. 6th Ave, and the event is 4-7pm.

On Friday, 16 Tons begins its Funk ‘n Wild Fest, a perfect segue from Tower of Sour. And Beergarden celebrates its 3rd Anniversary with three collaboration releases: with Yachats, ColdFire, and Agrarian Ales. I’m excited to taste these!