This week’s beer deliveries had quite a few gems and rarities (see previous post), but I wanted to give a fuller update here:

Widmer Citra Blonde and Alchemy Ale. In the quest for consistency, Widmer came up with Alchemy hop blend several years ago. It’s mostly Warrior and Millennium, with a couple other varieties in there. Hop blends are a good insurance policy for breweries who depend on an extremely consistent product; if one variety doesn’t do so well one year, the percentages in the blend can shift with little noticeable effect in the beer. Both the Citra Blonde and Alchemy Ale (of course) use the blend. Citra clocks in at a quaffable 4.3% abv and 20 IBUs, and Alchemy is 5.8% and 40 IBU. Here’s a really cool article about IBUs!

Schooner EXACT out of Seattle is a relatively young brewery (founded in 2006 as a nano-brewery) that has a growing reputation for solid ales; they now have a full restaurant and taproom. We got the King St. Brown, which should have full chocolate and nut flavors, but not finish too sweet. 5.5% abv, 32 IBus, just right for a brown ale. 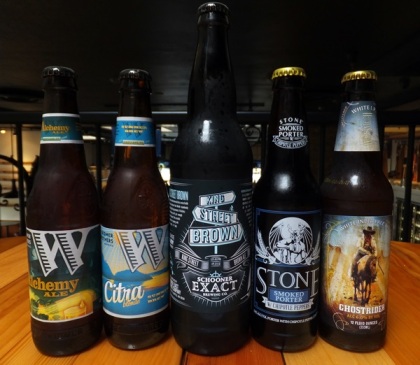 If you’re looking for a more culinary experience in a bottle, Stone put out Smoked Porter with Chipotle Peppers. Smoked beers are definitely an acquired taste, and the addition of peppers amplifies that fact. However! Smoked Porters are somehow way more accessible than German Rauchbiers, the smoke acting as a great complement to chocolate and darker malt flavors rather than dominating the whole thing. If you try this and like it, also check out  Alaskan’s Smoked Porter. Both these beers will pair well with grilled or smoked fish.

Last, but not least – and I will be posting more on this subject – we have craft ciders. The last few years have seen an explosion of new cideries in the region, which makes perfect sense; Oregon and Washington produce tons of apples. I’ve been thrilled with Wandering Aengus’s selection of Single Varietal ciders, like Wickson, which blurs the line between cider and riesling; crisp and acidic, but with super smooth and bright apple flavor. The Golden Russet has a more tannic aspect, with some deep honey and caramel notes. Yesterday I got to taste a couple ciders from Finn River, up in the Olympic Peninsula. Their Dry Hopped Cider uses classic Cascade hops to add an earthy and citrusy tang to sweet dessert apple flavors, with a moderately dry finish.